The media is one of the biggest influencers and perpetuators of popular culture. They not only inform society, but also set the boundaries of what’s “normal,” “accepted,” or “trending.” The evolution of social media and technology has changed the way we engage with the media and has given a voice to the voiceless and under-represented. We’ve seen the demand for body diversity, ethnic diversity and gender diversity in mainstream media; but what about disability diversity and inclusion in the media?

Almost 1 in 5 Australians reportedly living with a disability (18.3 percent of the population). But, they say you can’t be, what you don’t see. So, according to traditional mainstream media, it would seem 4.3 million Australians simply don’t exist.  What impact does this have on children and how can they be, or even dream of being what they don’t see?

Developmentally, children aged 0-5 will learn some of the most important lessons that will stay with them for the rest of their lives. Not only are they impressionable, but they’re constantly consuming media; from television to magazines to portable devices like phones and tablets. They’re bombarded with messages, learning about the world, themselves and how they fit into it. So what are we doing to ensure all Australians are seen and heard?

Australia is widely celebrated for its diversity. It’s far from perfect and it’s been a long time coming, but we’re hoping these examples of inclusion in the mainstream media will begin a domino effect of disability diversity and representation for all in Australia’s media.

Blink and you might miss it – ordinary children breaking extraordinary moulds.

In March 2016, Kmart Australia featured two models with a disability in their Easter catalogue. 11 year old Cooper who has Cerebral Palsy and another young boy with Down Syndrome. 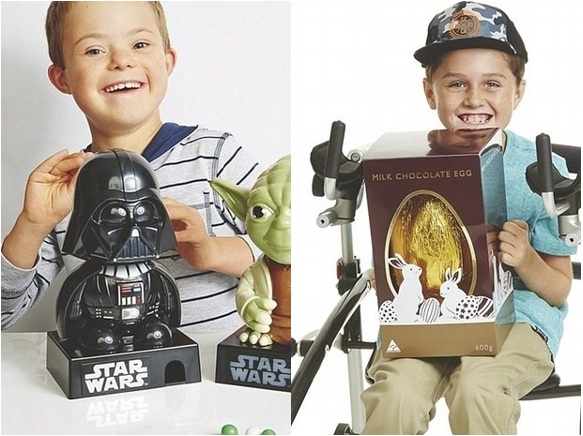 Continuing this commitment, they released a television campaign right on brand with Kmart’s facelift. This fun, up-tempo and colourful advertisement, featuring playful and happy children makes some bold statements in just 30 seconds. Not only does it feature Barbie reborn, a new range of Barbie dolls that reflect body diversity and individuality, it also features a boy playing with dolls. We then see both boys and girls playing and creating with Legos. (Tick for gender diversity and a tick for body diversity!)

The final scene begins with an excited girl galloping around in her pink swan costume. She’s jovial; she’s beautiful, and she has Down syndrome. You might have to do a double take to notice, as both children in this scene seem as ordinary as any other kid, which they are, and that’s what’s extraordinary. Before an extra chromosome or disability, these children are just children. They play, they dream, and they’ll probably harass their parents to buy what they see on TV; just like any other child.

When asked about their commitment to diversity, Kmart told Essential Kids;

“At Kmart Australia, we want to reflect every person who walks into our stores – whether they are a team member, a customer, a contractor or supplier.  Inclusion is important to us at Kmart no matter a person’s race, gender, ethnicity, age, ability, appearance or attitude and we are focussed on continuing to improve on this commitment. This is not a new focus for Kmart Australia, but an extension of our broader and very important focus on improving diversity within our business.”

Congrats Kmart – you’re truly leading the way for true inclusion and diversity in this new, ground-breaking ad. We hope it continues and is not just a fad for publicity’s sake.

Down syndrome is just one part of Caleb’s life; however, it does impact some of his communication skills. His mother was inspired by Target US campaigns featuring children with disabilities and appealed to Target Australia on Facebook.

Target was quick to respond, and Mr Miano, Head of Creative and Catalogue design at Target said “We are very inclusive about our customer base and diversity,”

Caleb’s Mum said he is a natural and she enjoys watching her son transform in front of the camera. Caleb has also walked in a Myer fashion parade for charity and hopes for a bright future in modelling. 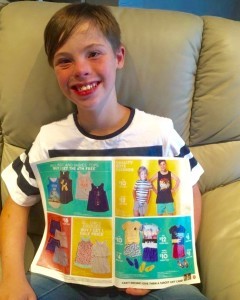 Targets’ message of inclusion has been quite strong this year, in both print and television. Emily Prior, a nine year old with Cerebral Palsy was contacted by Target through the assistance of Starting with Julius, to feature in two catalogues; The greatest toys imaginable and Kids Fashion Catalogue. Emily’s mother was persistent in finding a campaign for her daughter who at eight years old asked, “Why are none of the models here disabled like me?” after flicking through weekly catalogues.

Click here to read the behind-the-scenes story of how Emily scored the promo job and why Emily’s mother commented to SourceKids.com.au that, “Today my daughter’s dream came true and therefore so did mine. It is the culmination of persistence and determination even when things looked impossible.”

Para-athlete and 19 year old blogger, Robyn Lambird, was featured in Target’s Spring activewear catalogue. Robyn is an ambassador for Starting with Julius and hopes to normalise disability.

She said “For me, it’s all about breaking the misconceptions around disability and changing the attitudes to make them a bit more positive. This is a big step forward.”

Starting with Julius is an organisation created to stimulate conversation and awareness through two core pillars; inclusion in the media and inclusive education. Their website states “they’re committed to the equal representation of people with disability in advertising, media and beyond and the use of empowering and inclusive imagery and messages,” and have been instrumental in recent ad campaigns featuring people with disabilities. Their ambassadors are shaking up mainstream media, challenging the preconceptions and stereotypes of ‘low expectations,’ for people with disabilities, and their message of inclusion is one we can all get behind.

Inclusion benefits society as a whole. Improved cohesion, education, economics and social autonomy for all Australians ensures everyone can thrive. If 1 in 5 people are living with a disability, then there is 4.3 million Australians with unprecedented potential waiting to be seen and heard. 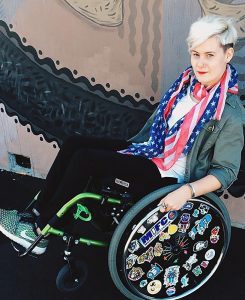 Diversity and inclusion should not be buzzwords; they should be the pillars in which a successful society are built on. We’ve only scratched the surface of what inclusion truly looks like and for children dreaming and wishing of what they could be, it’s a welcome change for them to see themselves represented in the media.

Hopefully, we’re only at the beginning of this movement, and once we push past the ‘trend,’ of being inclusive, we hope to see a world where a boy in a wheelchair or a girl with Down syndrome are just children; as diverse and colourful as you would see in any classroom or playground.

This is a call out to all brands to shake up your traditional brand images and start including more cross-representational images of all Australians.

Anytime you come across a big brand using positive images of people with a disability, feel free to add the links in the comments below so we can all recognise and applaud the brands that are starting to make a difference to traditional media.