It’s controversial, highly debated and emotionally charged. Whatever your stance on the issue, Medical Marijuana was legalised on the 30 October 2016 with the Narcotic Drugs Amendment. This milestone legalises medicinal cannabis for use in the treatment and management of painful, chronic and terminal conditions.

Some medical conditions of interest that could benefit from medical marijuana include:

Federal Parliament support, allows cannabis to be legally grown in Australia for medicinal purposes. Each State and Territory has their own legislation and while growing has commenced in some states, there are strict regulations around licensing, availability and distribution. Here are some key outcomes in each State and Territory. Source

Access to Medical Cannabis Bill 2016 was passed in April 2016 and provides regulation for manufacture, supply and access to products and will be available for children with epilepsy from early 2017.

In July 2016 the NSW government obtained the first license from the Federal Government to grow cannabis for medical use. It is the first state to make medical marijuana available for adults with end-of-life illnesses under the Medical Cannabis Compassionate Use Scheme.

The Public Health (Medical Cannabis) Act 2016 passed 12 October 2016. This new framework allows medicinal cannabis products to be prescribed and dispensed to patients in Queensland. From March 2017, specialists can prescribe for some patients. Click here for more information.

From November 1, doctors can prescribe under strict conditions however supplies won’t be available until 2017.

Legislation still in the works for 2017

Not legal at the time of writing

So how did we get here and what does it mean?

The legalisation of Medical Marijuana should not be confused with the deregulation or illegal recreational use of Marijuana. Queensland Health Minister Mr. Dick said, “this bill will change the paradigm for seriously ill patients who often feel compelled to seek out illicit cannabis treatment options.” The Narcotic Drugs Amendment supports the controlled cultivation of cannabis for medicinal or scientific purposes. Patients and their families will not be able to grow their own cannabis and recreational use is still strictly illegal. “

The government wants to negate foreign supply through the legalisation of licensed growers, and some are optimistic about the financial boost it will give the economy. Tom Richardson from Investment group The Motley Fool Australia said the domestic medicinal cannabis market could be worth more than $75 million a year.

A Cannabis License and permit under the NDA Act has three categories:

This 60 Minutes Australia video from 2014 might change your mind…

There are concerns however that limited legalised suppliers and heavy regulations mean the illegal market will still be profitable and viable because those suffering now can’t wait. Prolific advocator Lucy Haslam said, “the complicated application and import process won’t make it any easier for patients to get access to medical cannabis.”

Lucy and the Haslam family are credited as one of the biggest advocates for Medical Marijuana. Her son Daniel Haslam was diagnosed with bowel cancer at just 20 years old, and after four years of chemotherapy and surgeries, he was rapidly declining. A friend suggested cannabis to help with chemotherapy, and after watching their sons prolonged suffering, they knew they had to try something. The family had to navigate the often murky world of marijuana for their son because they saw first-hand the benefits and visible changes to Dan’s appetite and pain management.

After the death of her son in February 2015, Mrs Haslam spearheaded state and national campaigns to legalise the Medical cultivation and use of marijuana; spurred on by her promise to her dying son. “My goal is that in the short- to mid-term we’ll be able to produce a product to supply people like Dan who need compassionate access to medical cannabis now.”

“The long-term goal is for medicinal cannabis to be legalised, but further to that, we need to make sure that when it’s legalised it’s affordable,” said Mrs. Haslam.

It’s a far cry from the stereotypical “stoner” narrative, and it’s hard to wrestle between the image of University students cutting class to get high and a dying man using Cannabis oil to combat nausea, stimulate his appetite after chemotherapy and manage pain.

The Haslams forced politicians and the public to listen. They’ve paved the way for Australians and their families, desperately waiting for a legalised way to support and manage their severe conditions. 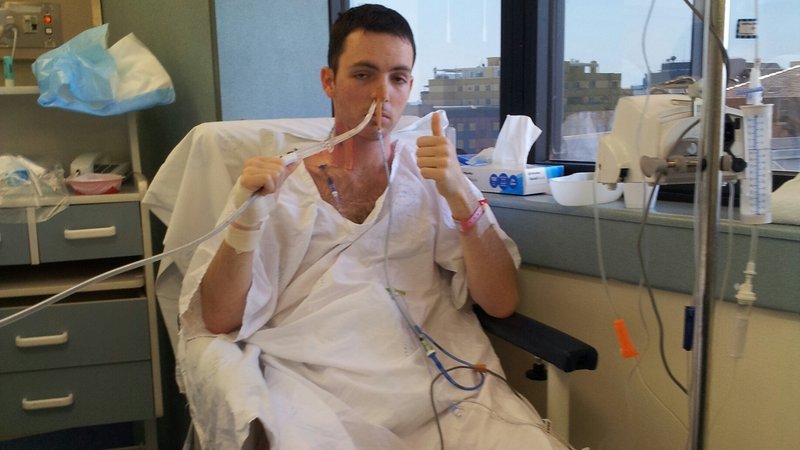 What is Medical Marijuana?

Medical Marijuana comes from the Cannabis Stavia plant which is made up of 60 compounds. Medicinal properties are harnessed from two properties; THC, which is a psychoactive compound responsible for the notorious “high” feeling and CBD which counteracts the high but still delivers the user relief.

This select strain is grown, cultivated and processed under strict guidelines. Andreas Gedeon, managing director of international medical cannabis company MMJ PhytoTech, said there are guidelines in place which include pharmaceutical-grade testing, quality control and certification – “none of which regularly grown cannabis has.” It will then be available as a tincture, vapour, capsule, oil or spray and at selected pharmacies.

To obtain medical marijuana, you must identify with one of the approved uses (conditions) in your State or Territory which can be obtained under the Special Access Scheme or Authorised Prescriber Scheme. You then obtain a prescription from a specialist doctor and use approved products under the Therapeutic Goods Act (TGA) relevant to your regions legislation. Personal crop, purchase from non-sanctioned suppliers or any involvement in marijuana use even for medical use outside of these regulations are illegal.

The Office of Drug controls states “Domestic cultivation of medicinal cannabis will enable sufficient quantities of raw materials to be available to meet the needs of local manufacturers. It also ensures that quality control measures on medicinal cannabis-derived products can be enforced to protect patient safety.”

Current use for Medical Marijuana

For suffering Australians and their families who currently use medicinal cannabis products, it’s a welcome change. The Dell family, who have six autistic children, have risked legal action and Government intervention to help their daughter Abbey who has a rare genetic disorder, CDKL5, which has left her unable to walk, speak or eat without a tube.

At just one month old, Abbey suffered her first seizure, and as time went on, they increased until she was having seizures that lasted up to 20 minutes. She wasn’t given a fighting chance, and the doctors gave the Dell family two months until end of life.

After two years and failed medications that left Abbey in a catatonic state, her mother Cherie started researching alternatives. She found families in the US who had legal access to medical cannabis to treat Dravet Syndrome, a severe form of epilepsy.

Since using the tincture, Abbey’s seizures have decreased, and she’s regained her appetite. Her parents are grateful for every ‘ínchstone’ Abbey achieves and are hopeful for her future.

The only legal uses which will be available early 2017 are for:

Access, prescriptions and regulations are State- and Territory-specific, and only some of the aforementioned conditions are approved for Medical use under State law.

While the legislation under the Narcotics Drug Amendment Act permits the legal cultivation of cannabis for the manufacture of medicinal cannabis products; it is the job of the States and Territories to regulate and manage. Access to Medical Marijuana already existed in some States under the Special Access Scheme, however, legalised cultivation and manufacturing has completely changed the face of Medical Marijuana in Australia. This has caused some concerns within the community as to whether those in need will actually have access to the drug.

Firstly, products obtained legally must be approved under the TGA. To have your product approved, you must have a license to supply and operate as a business. There are three licenses;

To obtain these licenses and permits, there is an application process to ensure you pass the ‘fit and proper test,’ application fees as outlined below. Source

Fees and charges for industrial hemp licences are not refundable.

The bureaucracy around obtaining a license and the fears of ‘big business’ cashing in on the billion dollar industry, has domestic, already-operational businesses worried they’ll be overlooked; and the people who desperately need it, won’t be able to afford it.

Lucy Haslam told the ABC; “We’re seeing large companies that are very cashed up looking to come to Australia, so it is at risk of being all about money rather than all about patients. The risk in that, is making a system that is so convoluted and complicated for patients and prescribers that it actually doesn’t fulfil the reason it was established in the first place and that people will just stick with the black market.”

Earlier this year, Canadian company Tilray partnered with the NSW Government and the University of Sydney to commence the world’s biggest trial of Marijuana’s impact on chemotherapy patients. If successful, the company hopes to import products from Vancouver and add a plantation in Australia to its $250 billion global industry.

While many Australians rejoice at this landmark decision, it is unchartered waters and a lot is still unknown. From licensing to manufacturing, to access of products, there are a lot of Australians eager to see how this next chapter plays out. We hope, for the sake of those suffering and their desperate families, that the potential positive benefits of medical marijuana are not overshadowed by bureaucracy and corporate interest.

If you suffer from Epilepsy (partial onset seizures) or knee pain due to Osteoarthritis and you’re interested in being included in a medical cannabis clinical trial at the University of the Sunshine Coast in Queensland, click here for more information. The trial will consist of a using a gel treatment containing a synthetic cannabinoid which is applied to the skin.